In Elden Ring, Black Knife Catacombs is a location. The entrance to there can be discovered in the far north-eastern corner of the Liurnia of the Lake region. After passing the Minor Erdtree, you will arrive at the entrance to the catacombs if you travel in a northerly direction after leaving the Ruined Labyrinth Site of Grace. A Mausoleum Knight stands sentry at the entrance to protect those who enter. 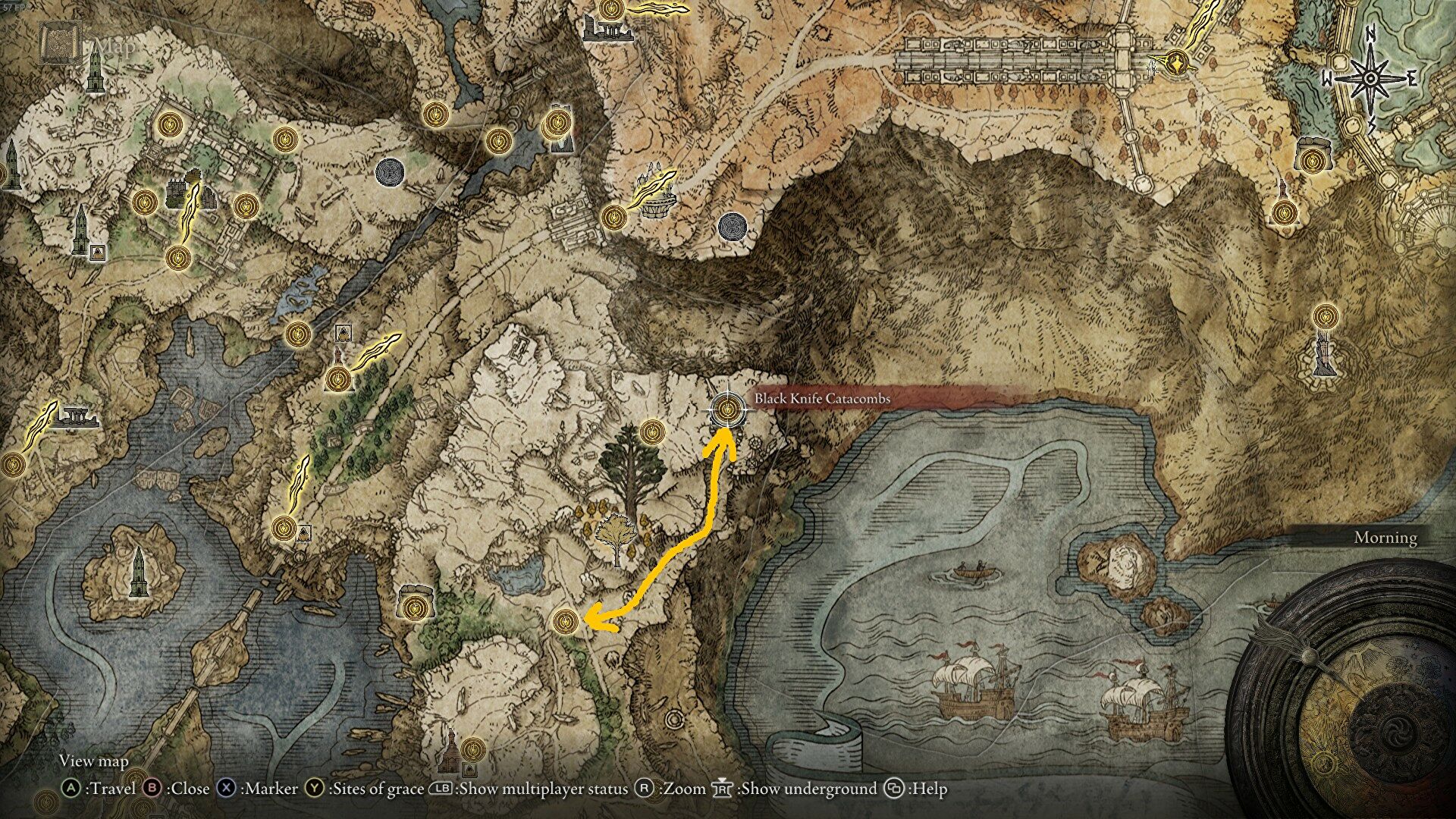 There are no NPCs in this Elden Ring Location.

The Black Knife Catacombs have a large number of skeleton foes and a number of guillotines that move around the different chambers. The sewers are overrun with crabs, including two enormous crabs that are lying in wait for unwary victims. The Black Knife Assassin fight is optional for the player to progress through in order to locate the lever that opens the doors to the Cemetery Shade fight. Both of these bosses are located in distinct rooms and have different loot.

A significant number of the skeletons that can be discovered in these Catacombs engage in the peculiar habit of rolling toward the player while also engaging in rather quick attacks. Players need to exercise caution when facing up against these foes because of how quickly they can close the distance and launch an assault. Some of the skeletons have unique properties, such as the fact that they cannot be eliminated on their own; instead, the player must vanquish the neighboring necromancer, which results in the elimination of the skeletons in a manner that is both immediate and irreversible (until you rest or die). When you are descending the steps from the Site of Grace, you will find one of these skeletons halfway down the flight. You can move back up the steps to make the fight more bearable.

When you reach the bottom of the steps, you will see two statues on either side of the doors that shut the entrance to the catacombs. When you pull the lever that is located at the very end of the catacombs, these doors will open for you. Once you go through these doors, you will face the final boss of the catacombs. The way forward is down a few stairs, which can be accessed by going to the left. Once they notice you, the skeletons that are located at the bottom of these stairs, one of which is at the junction and the other of which is further down the tunnel, will begin rolling quickly in your direction. Moving up the stairs can be helpful during the battle because it brings the opponents into a larger combat area and can provide assistance with kiting them.

This passageway's first turn to the left leads to a room that's guarded by a statue of an imp; to get inside, you'll need a Stonesword Key. You will encounter two skeleton foes on the left side of the chamber upon entering. The Rosus' Axe may be found on the skeleton that is resting against the gravestone in the center of the area.

Continue moving on until you reach the room with the multiple guillotines and the two skeleton archers. If you run past this location, you will enter a room with another rolling skeleton and a staircase that will take you down to the sewer level. When they are destroyed, the numerous little crabs that may be found in the sewer level will release crab eggs. These crabs are not hostile. You can also see the lever below the illuminated statue that is stored behind the rusted bars from this vantage point; however, the only method to access the space behind the bars is from another location. When the player moves forward, the Giant Crabs will emerge from the earth, one in front of them and one behind them. At the conclusion of the section devoted to the sewers, a Rune Arc can be discovered.

The player needs to get to the area with many guillotines in order to proceed farther in the Catacombs. Once there, they must ride one of the guillotine blades upwards until they reach the platform above. Eliminate the skeleton archers in the room to prevent them from interfering with your efforts. In the passageway that leads to the platform above, there are two foes huddled together in a confined area; you will need to eliminate them one at a time in order to access the next area, which is a lengthy and spacious room filled with multiple statues depicting Erdtree Burial Watchdogs as well as multiple foes. Continue to travel the road, and the wall that was at the end of the trail will vanish when it is attacked, revealing the golden veil that is needed for the battle with the Black Knife Assassin. Before the fight begins, there is a Golden Summon Sign that, if you interact with it, will allow you to call in D, Hunter of the Dead as an ally during the fight.

In the area with the vanishing wall, there is a little shaft hidden behind a Grave Glovewort on the right side of the room. The player will be able to access the lever that unlocks the catacomb doors once they have fallen down this shaft. There, you will discover the Ghost Glovewort as well as two skeleton foes and the lever to release the rusting gate that will lead you out of the area.

This encounter can be significantly simplified if you utilize the Golden Summon Sign and bring D with you. Doing so will allow you to have another character tank for you while D draws the boss's attention. The Black Knife Assassin boss has a quick movement speed and can avoid many assaults while they are on the run. They have two separate attacks, both of which may be easily anticipated and avoided. They will shoot a red missile at the player whenever one of their arms begins to glow red, and they will also periodically leap into the air with a big jumping assault that can be easily avoided. After defeating this boss, you will be able to claim the Assassin's Cerulean Dagger, the Black Knifeprint, and 3150 Runes as your rewards.

During the battle against the Cemetery Shade, you will face a number of skeleton foes that work together to aid the monster. When the player is encircled by them and struck by the green missile fired by the monster, which locks them in place, the fight can become extremely perilous for them. In addition, as it closes in on the player to engage in a melee battle, the Cemetery Shade boss is equipped with brief blinks that allow it to avoid attacks. Because these bullets move fairly quickly and may be difficult to avoid on their own, you should position yourself around the pillars so that you can use them to absorb the binding shots. When you have defeated this boss, you will receive 3500 Runes in addition to the Twinsage Sorcerer Ashes as a prize. The room has a chest, and the contents of the chest include a deathroot.